Do your children know what we observe on Memorial Day? You can read this post to them; discuss the poem In Flanders Fields and have them copy it; attend a parade; visit a vet, or decorate graves of military personnel; making this holiday more personal as part of your history studies.  Here is the origin of this holiday from History.com

Memorial Day is an American holiday, observed on the last Monday of May, honoring the men and women who died while serving in the U.S. military. Originally known as Decoration Day, it originated in the years following the Civil War and became an official federal holiday in 1971. Many Americans observe Memorial Day by visiting cemeteries or memorials, holding family gatherings and participating in parades.

The Civil War, which ended in the spring of 1865, claimed more lives than any conflict in U.S. history and required the establishment of the country’s first national cemeteries.

By the late 1860s, Americans in various towns and cities had begun holding springtime tributes to these countless fallen soldiers, decorating their graves with flowers and reciting prayers.

Did you know? Each year on Memorial Day a national moment of remembrance takes place at 3:00 p.m. local time.

It is unclear where exactly this tradition originated; numerous different communities may have independently initiated the memorial gatherings. Nevertheless, in 1966 the federal government declared Waterloo, New York, the official birthplace of Memorial Day. It first celebrated the day on May 5, 1866, and was chosen because it hosted an annual, community-wide event, during which businesses closed and residents decorated the graves of soldiers with flowers and flags.

On May 5, 1868, General John A. Logan, leader of an organization for Northern Civil War veterans, called for a nationwide day of remembrance later that month. “The 30th of May, 1868, is designated for the purpose of strewing with flowers, or otherwise decorating the graves of comrades who died in defense of their country during the late rebellion, and whose bodies now lie in almost every city, village and hamlet churchyard in the land,” he proclaimed.

The date of Decoration Day, as he called it, was chosen because it wasn’t the anniversary of any particular battle.

On the first Decoration Day, General James Garfield made a speech at Arlington National Cemetery, and 5,000 participants decorated the graves of the 20,000 Union and Confederate soldiers buried there.

Many Northern states held similar commemorative events and reprised the tradition in subsequent years; by 1890 each one had made Decoration Day an official state holiday. Southern states, on the other hand, continued to honor their dead on separate days until after World War I.

Memorial Day, as Decoration Day gradually came to be known, originally honored only those lost while fighting in the Civil War. But during World War I the United States found itself embroiled in another major conflict, and the holiday evolved to commemorate American military personnel who died in all wars.

For decades, Memorial Day continued to be observed on May 30, the date Logan had selected for the first Decoration Day. But in 1968 Congress passed the Uniform Monday Holiday Act, which established Memorial Day as the last Monday in May in order to create a three-day weekend for federal employees; the change went into effect in 1971. The same law also declared Memorial Day a federal holiday.

Cities and towns across the United States host Memorial Day parades each year, often incorporating military personnel and members of veterans’ organizations. Some of the largest parades take place in Chicago, New York and Washington, D.C.

Americans also observe Memorial Day by visiting cemeteries and memorials. Some people wear a red poppy in remembrance of those fallen in war—a tradition that began with a World War I poem, In Flanders Fields.

“In Flanders Fields” by John McCrae

In Flanders fields the poppies blow
Between the crosses, row on row,
That mark our place; and in the sky
The larks, still bravely singing, fly
Scarce heard amid the guns below.

We are the Dead. Short days ago
We lived, felt dawn, saw sunset glow,
Loved and were loved, and now we lie
In Flanders fields.

Take up our quarrel with the foe:
To you from failing hands we throw
The torch; be yours to hold it high.
If ye break faith with us who die
We shall not sleep, though poppies grow
In Flanders fields.

Happy Jelly Bean Day! Making jelly beans is much more involved than I realized. Jelly beans were first made popular during the Civil War and were the first candies to be sold by the pound.

I think your student will find this video very interesting.

Here are some fun things for school that you can do when working with jelly beans. 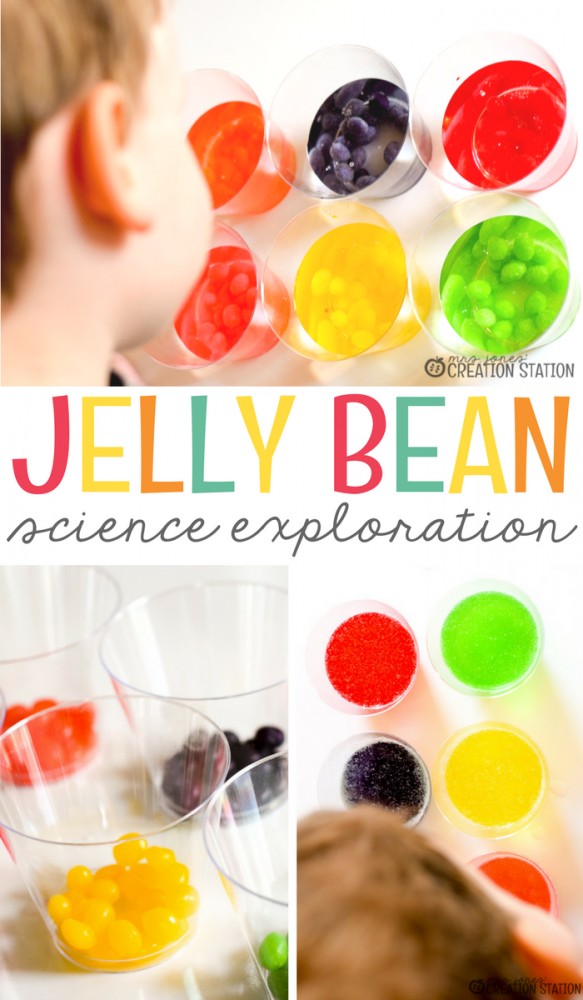 Homeschooling with real books (library/trade books) is much more interesting than exclusively using a textbook. The use of literature can be used to introduce, develop, or reinforce a concept that you are teaching. You may totally agree with me and are getting excited about doing this, but then comes the next thought, “Where do I begin? What books would I use?”

Serious Fun: Homeschooling with Real Books by Kristin Draeger is just such a resource you need! Kristin shares her personal homeschool experience of how she created this 120+ page list of books, games, puzzles, videos, and music.  I appreciate that she has created such a fantastic open-and-go reference guide. She has taken the time to do this so that you can do other things! Kristin has categorized the books into the subjects of math, science, history/ geography, literature, grammar, and art history. She has also created subcategories of books for students K-3 and 4th-8th grade.

I love that Kristin has included extras for your student like this CD (or streaming option) that is about addition, skip counting, and money, but also includes some art, history, and information about space.

Math games are a terrific way to practice what has been taught without the use of yet another worksheet. Kristin recommends this logic game and I second it as my sons had this when they were young. It is compact and comes with a travel bag so that it can be played in the car or taken to doctor’s appointments. If you’d rather not take it out, it can be used as a culminating activity after your math lessons. If you click on the picture, you not only see the game, but you can watch a short video on the webpage on how it is played.

Serious Fun: Homeschooling with Real Books is a great deal at just $10.00. This is one book that I think you would return to time and again for ideas for your library trips or stock your own library shelves with real books.

Have a great week! ~Lisa~

I received a free review copy of this book from the author/publisher in exchange for an honest review. All thoughts and opinions are my own.

Here is a little bit of history about the day we call April Fools’ Day. I found some interesting details on the website, history.com, for you to share with your children today when studying Social Studies.

Although April Fools’ Day, also called All Fools’ Day, has been celebrated for several centuries by different cultures, its exact origins remain a mystery. Some historians speculate that April Fools’ Day dates back to 1582, when France switched from the Julian calendar to the Gregorian calendar, as called for by the Council of Trent in 1563.

People who were slow to get the news or failed to recognize that the start of the new year had moved to January 1 and continued to celebrate it during the last week of March through April 1 became the butt of jokes and hoaxes. These pranks included having paper fish placed on their backs and being referred to as “poisson d’avril” (April fish), said to symbolize a young, easily caught fish and a gullible person.

Historians have also linked April Fools’ Day to festivals such as Hilaria, which was celebrated in ancient Rome at the end of March and involved people dressing up in disguises. There’s also speculation that April Fools’ Day was tied to the first day of spring in the Northern Hemisphere, when Mother Nature fooled people with changing, unpredictable weather. (Sounds like Ohio, doesn’t it? lol)

April Fools’ Day spread throughout Britain during the 18th century. In Scotland, the tradition became a two-day event, with “hunting the gowk,” in which people were sent on phony errands (gowk is a word for cuckoo bird, a symbol for fool) as one of the events.

In modern times, people have gone to great lengths to create elaborate April Fools’ Day hoaxes. Newspapers, radio and TV stations and Web sites have participated in the April 1 tradition of reporting outrageous fictional claims that have fooled their audiences. In 1957, the BBC reported that Swiss farmers were experiencing a record spaghetti crop and showed footage of people harvesting noodles from trees; numerous viewers were fooled. In 1985, Sports Illustrated tricked many of its readers when it ran a made-up article about a rookie pitcher named Sidd Finch who could throw a fastball over 168 miles per hour. In 1996, Taco Bell, the fast-food restaurant chain, duped people when it announced it had agreed to purchase Philadelphia’s Liberty Bell and intended to rename it the Taco Liberty Bell. In 1998, after Burger King advertised a “Left-Handed Whopper,” scores of clueless customers requested the fake sandwich.

Instead of playing pranks on one another, how about doing acts of kindness? You can also incorporate them as part of your studies. Bake cookies and take them to a friend or neighbor (science, math) or make Spring cards (language arts, art).
Have a great day! ~Lisa~
https://tpc.googlesyndication.com/safeframe/1-0-32/html/container.html

Looking for things to do in Ohio? Check out this website.  ONLY IN YOUR STATE Here you will find categories of attractions, food, and life that feature a variety of places to visit. I looked at the sites close to where I live and have found quite a few places I want to go and visit. What a great way to experience Ohio! You can also check out their historical sites to see and study for the state history requirement we have for homeschooling.

If you are going on vacation you can go to the home page for the listing of other states. There are the common places you may have already been to or seen, but there are also interesting and unusual places to visit.